Not all "Australian" pyrex sold in New Zealand was really made in Australia.

Pyrex production is reported as having commenced in Christchurch in the 1965-1966 financial year, so all Agee Pyrex and Crown Pyrex products sold in New Zealand before that date would have been Australian made. However, the situation after that time is very tangled.

The company name Crown Crystal Glass continued to be used in New Zealand after its Australian counterpart became Crown Corning in 1972. The date of the last New Zealand pyrex production is yet to be confirmed, but it was probably in the late 1970s. The Christchurch factory is said to have closed in 1987. 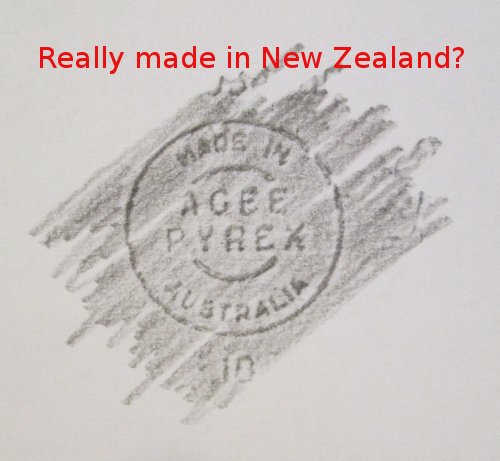 Some of the pyrex moulds used at the Crown Crystal Glass factory in Christchurch were not new. Old moulds marked with the AGEE PYREX backstamp, including the words MADE IN AUSTRALIA, were transferred there from Sydney. This was probably done to reduce the cost of setting up pyrex production in New Zealand.

As the country of manufacture marking on the old Australian moulds was now incorrect, the Christchurch factory applied an explanatory sticker to each dish before packing it. Naturally, dishes found today almost never have these stickers still on them.

This confusing situation means that some "Australian" pyrex dishes found in New Zealand are of unclear origin. Furthermore, as the New Zealand company continued to distribute Australian-made pyrex items through the 1960s and into the 1970s, it cannot even be said that all "Crown" pyrex sold in New Zealand after 1966 was locally made.

Dishes marked CROWN PYREX, CROWN OVENWARE and PYREX (TM) OVENWARE are also found in New Zealand. Some of these would have been local production.

However, the relatively free migration between Australia and New Zealand could also have had a small effect on what is found where today — some dishes may have been taken from one country to the other by private individuals.